Click (almost) any image to see a full-res PNG. 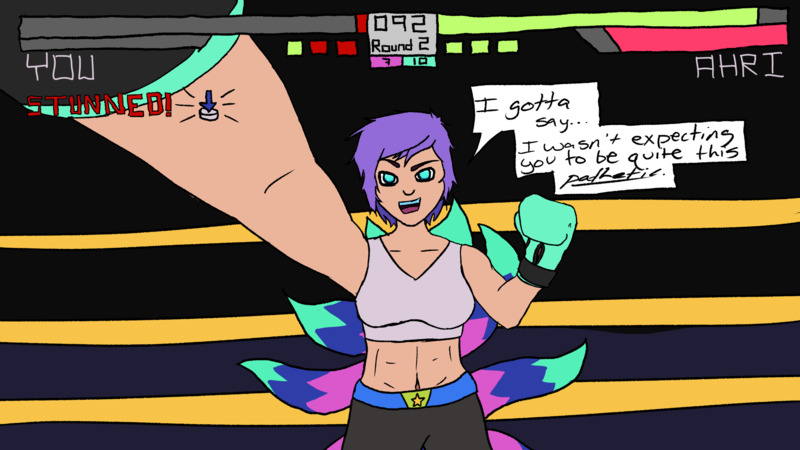 Alternate Title: Why Trying to Fight a Kitsune is Generally a Bad Idea 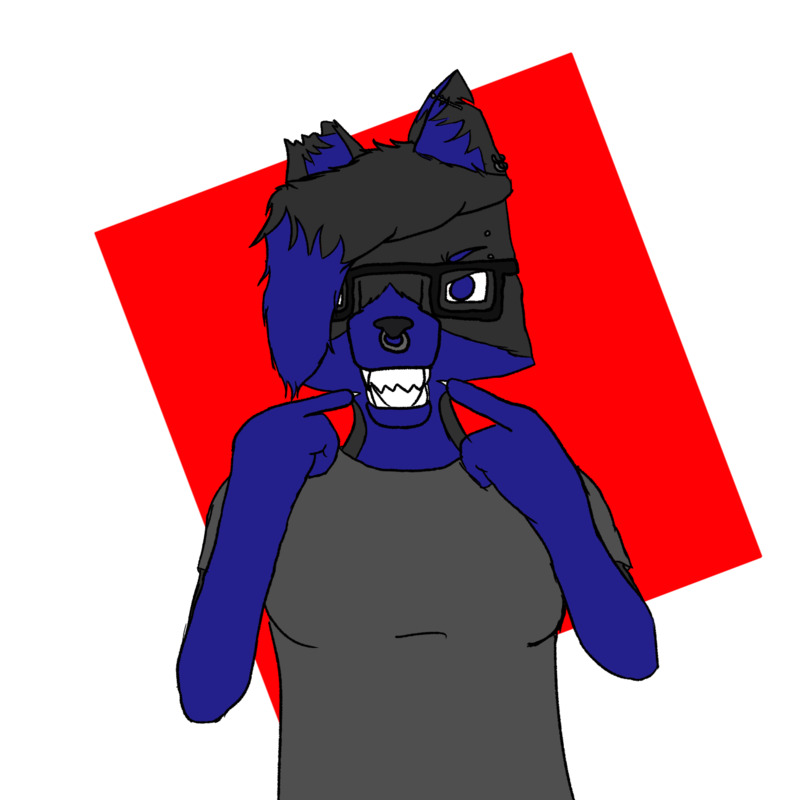 Can you believe this became a thing because some idiot thought it was a thing? It's beautiful.

So, yeah. Socialist teeth. Do you like them? They're nice and bitey. 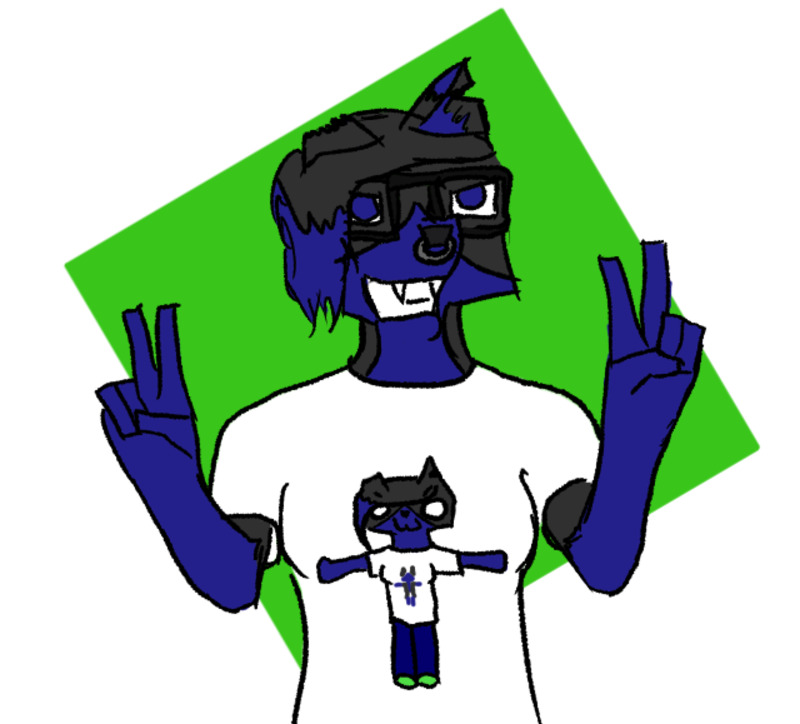 Based off of this toot by Srol. You can blame him for this. Sure, I drew it, but it's all his fault. 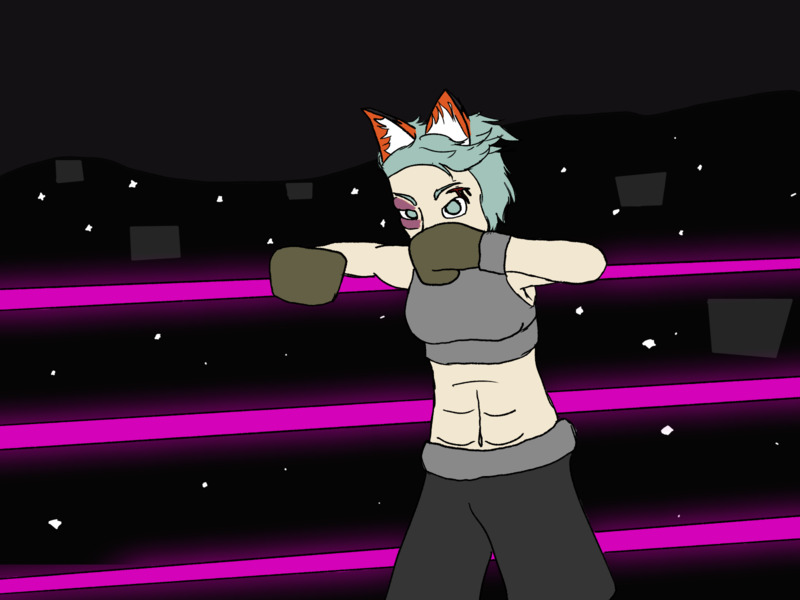 When you last saw Lorelai, she was a pathetic excuse of a boxer. Her skills were mediocre at best, but worse was the fact that she looked like she belonged in a hospital, not in the ring fighting in front of thousands. Persistent as she may have been, it didn't take much to put her anorexic ass down for the count.

This time, though, was different. Of course she'd gotten better. Given three years, you'd hoped she'd gotten better. But she also changed physically. Gone was the Lorelai who looked too anorexic to even hope to fight. This time, she'd bulked up. Not to mention the change of hairstyle. And her affect. Last time, she smiled the whole time, even as she took blow after blow. You sill remember the smirk as she got up from her fifth knockdown and, with more confidence than she had any right to have, simply said, "My turn~..." This time, the smile had been replaced by a grim look. The look of someone here for revenge.

The first few rounds seemed easy enough. By the fourth round, you'd already opened a cut on her left eye and started to swell the right one shut. But, as you watched the foxgirl rise from her fifth knockdown and wipe the blood from her face, an ominous chill ran down your spine. The look on her face, the way she stared you down...it sent the message loud and clear.

A few years back, I drew a boxing foxgirl. My grasp of anatomy was poor, and in hindsight, she looks horribly anorexic. Hardly fit to fight. Despite that, she carried a strong air of confidence. Though she had a black eye and a bloody nose, she was still smirking with a look that said "My turn~" (or, at least, that was the hope). Fast forward, and I decided to give her another piece. My grasp of anatomy may not be excellent, but it's much better than it was, and it shows. Were you to compare that image (later on down this page) to this one, you can see the improvement. I also changed her demeanor a bit. No longer the smiling, cocky foxgirl she was, she's now gotten serious. She's got one goal and one goal only: knock. you. out.

Also, I went for a more futuristic ring, because why not? Laser barriers ftw. 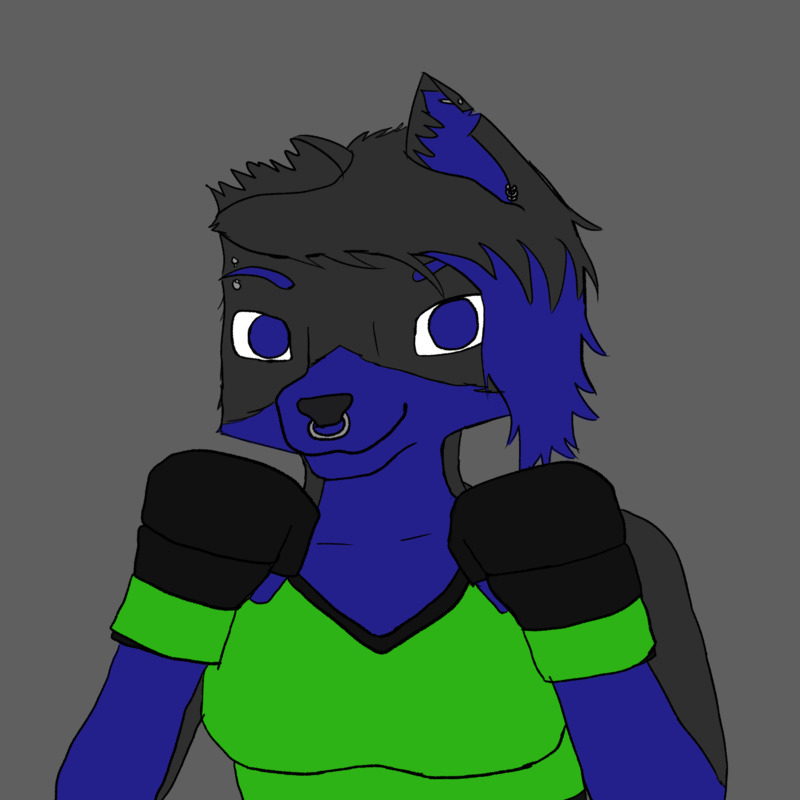 Not many folx IRL know this about me, but I really like combat sports, in particular MMA and kickboxing. I've wanted to take one of those up for a while (for more than just exercise), but between the effort it'd take, the brain damage I'd take, and the money a gym membership would take, I never have. I drew this to commorate this small fact about me. 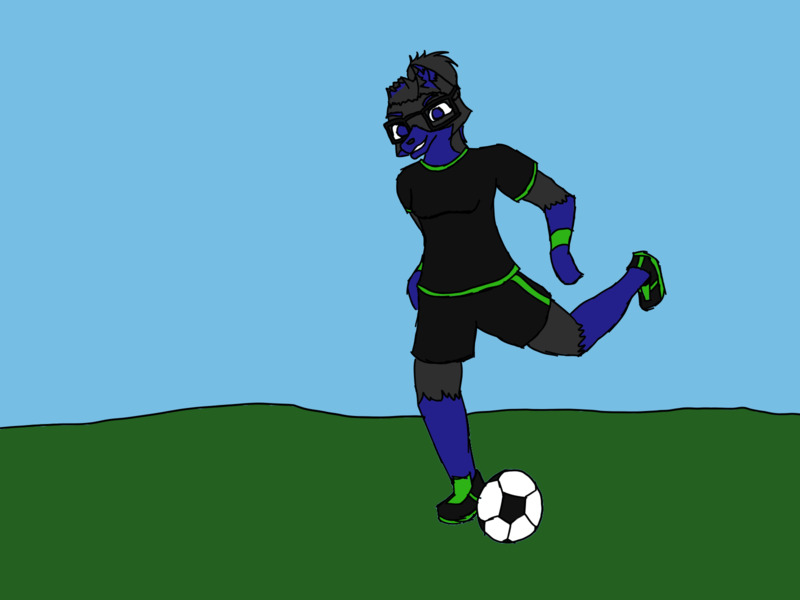 I had recently bought a football on a whim and started playing with it. I really enjoyed it and decided to draw Aura playing around with a football herself. 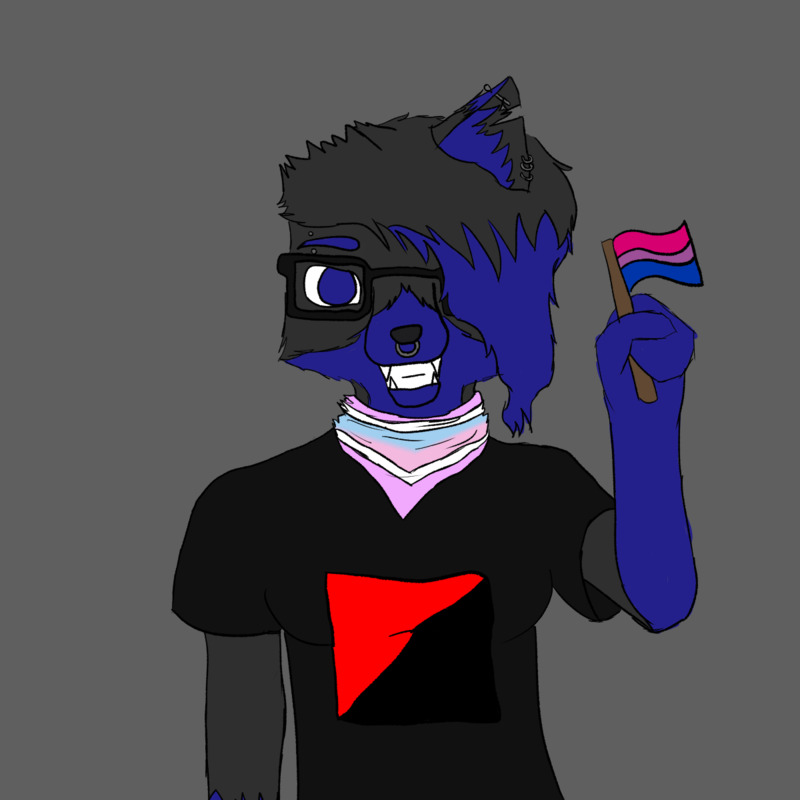 A pride avatar I drew back in 2019. The bisexual flag should be self-explanatory. The flag on the shirt was supposed to be the anarcho-syndicalist flag, but I think I accidentally got the ancom flag on accident (which is fine given the fact I'm now an ancom). The bandana was supposed to be the bigender flag, but I'm pretty sure it's actually an intersex pride flag, which is unfortunate because I'm not intersex. 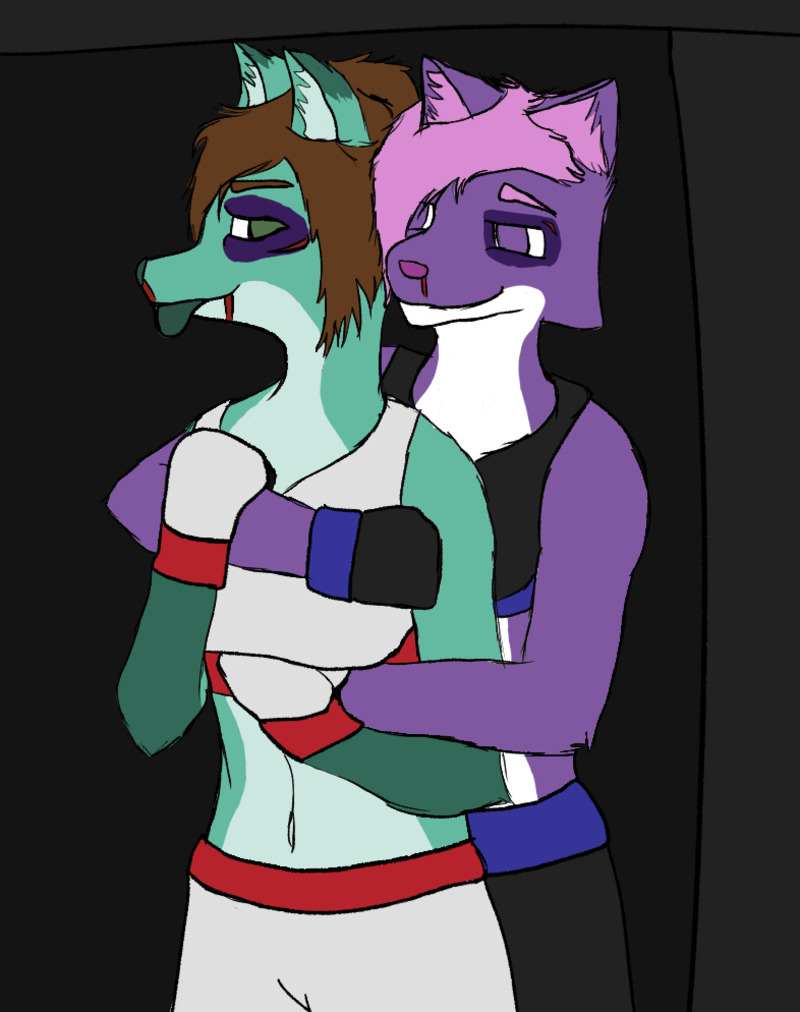 It seems Kaylee and Cora found themselves pitted against each other, and Cora came out on top. Ah, well. I'm sure she'll make up for the damage done somehow... 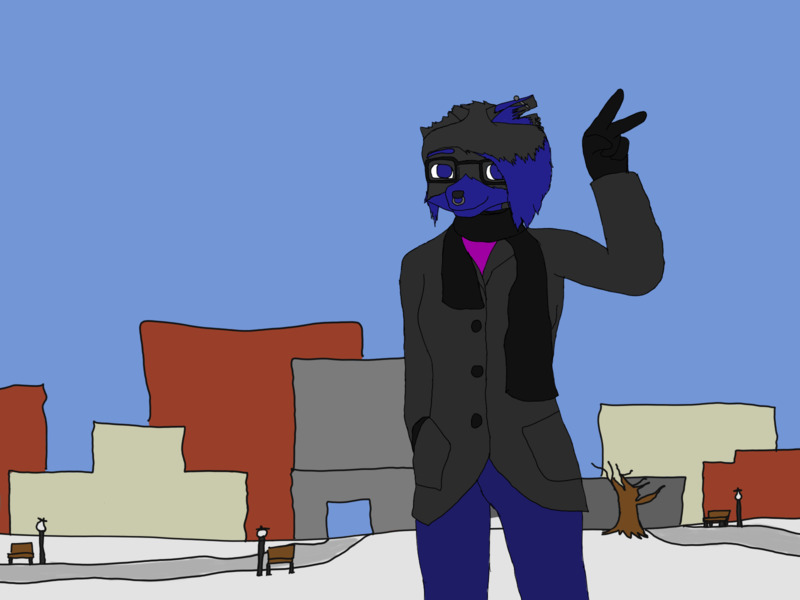 We, sadly, didn't get any snow the winter this was drawn. But, I wanted to draw Aura on a lovely stroll through the snow, so here it is.

Beaten, but not quite broken 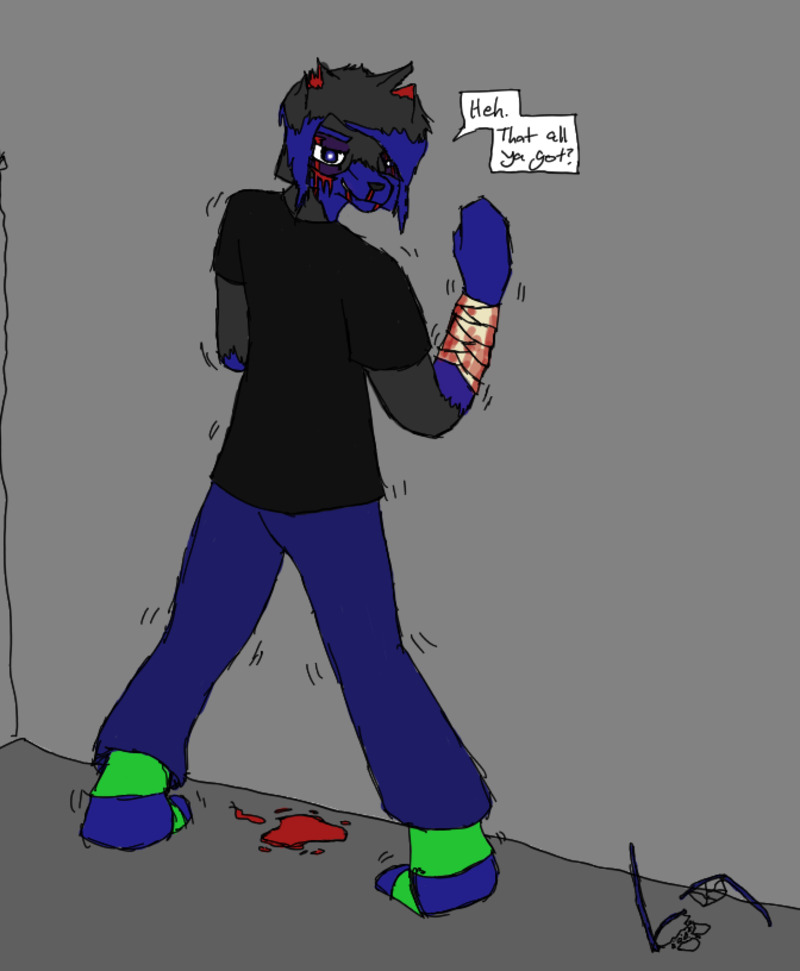 "Not yet. But do you really think you can beat me?"

Aura knew he was in for a tough fight. He'd already been continually beaten down. The fact that he kept getting up was a miracle more than anything. But he knew he had to keep fighting. His foe had nothing to lose: whether he won or lost, he'd die anyways by the time this fight was over. But for Aura, it was a matter of life and death. And, so, despite the cuts, despite the bruises, despite the pounding headache and the likely concussion, he stood up once more. He'd prop himself up in the corner if he had to, but he wasn't going down without a fight

He was going to win. He had to win.

Not just for himself, but for everyone he loved.

"Well, then! Bring it the fuck on! 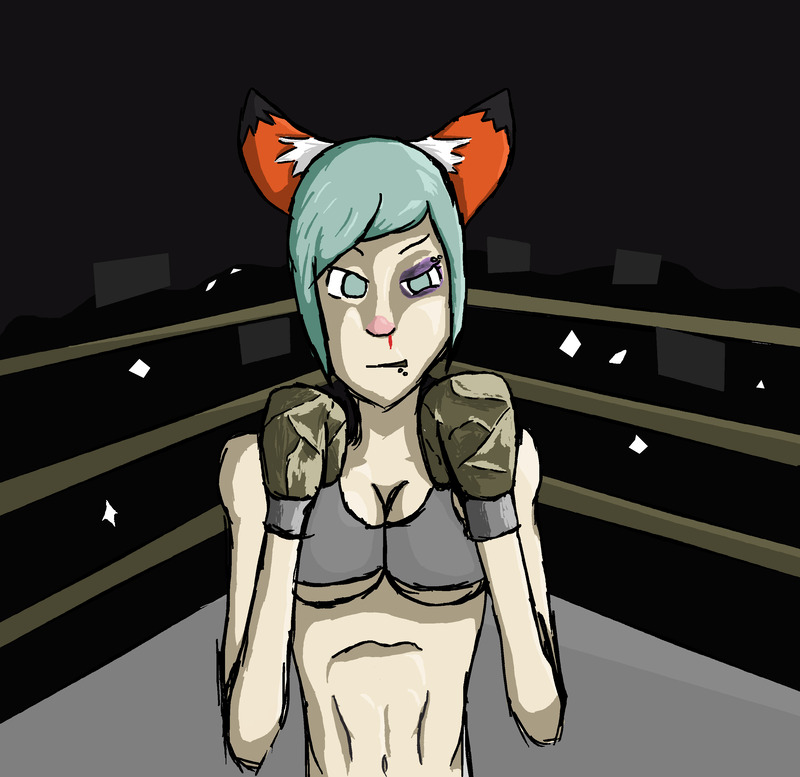 A piece I drew a few years back based off of this pixel art piece I'd done:

Unfortunately, in the jump from pixel art to drawing, the anatomy got much worse. She looks pretty anorexic here. By the way, notice that super harsh perspective? Yeesh. Like, it's done right, but has the focus points in waaaay too close.

This site best viewed at at least 800x600 using any HTML 4.01 compatible browser.