Fair question, reader. Online, I'm primarily Aura Vulpes, vulpine extraordinaire. I'm a black and blue anthro fox with xe/xyr/xem pronouns (though I will accept she/her/hers). However, you may see me around under those other two names. Kat (your friendly local kitsune!) is what I use in real life, though you're liable to see me around under that name online too (e.g. Mastodon as of time of writing and in the FENIX code repos). This is kinda who I actually am. Though my mood fluxes towards Aura and Lilix at times, I am primarily Kat the kitsune. Sometimes, in some of my more agender or horny moods, I gravitate towards Lilix, where I'm an agender incubus who uses fae/faer/faers pronouns. So, yeah. If you're ever unsure, feel free to ask, but, in general, Aura is a pretty safe way to refer to me online, as is Kat usually.

Do note that none of this relates to plurality, by the ways. None of this is different personalities or anything. Aura, Kat, and Lilix are all the same person: me. They're just a way to notate my current mood and/or gender. Now, I am plural, but I am (iirc) a median system. My headmate Jade never fronts, nor does Miles when he's around.

Warning: I discuss a lot of mental health/suicide/self-harm stuff below. Procede with caution.

Aura is my fursona. Xe first came around in February 2019 as an evolution of the older enderfox fursona. At the time, I drew xem as male as I was in a backswing of denial about being trans. But, eventually xe became the vixen we know and love and also managed to stick around longer than previous fursonæ Ryver Winterdale and Fenris Helmsúlfr. (I exclude the prior incarnation of the enderfox, as, again, Aura is something of an evolution from him.)

My strong association with xem is from two main sources. The first is in a variety of vent artwork I've done involving xem. I've drawn xem doing doing a variety of things, from cutting, to beating xemself up (literally), to expressing a desire to die, all as an expression of my own mental state. In some cases (e.g. the former two examples), it was also done to stop myself from doing those things myself. The other source is in going around the internet as Aura. After all, this is the name my primary online friend group knows me by. So, there's a strong tie to Aura through that as well.

Incidentally, the origin of Aura's missing right ear and notched left ear is in vent art. Specifically, it has to do with Beaten but not quite broken, in which you may note that the ears are drawn freshly damaged and still bleeding. I actually wasn't sure whether I was going to keep xyr ears like that or if it would be a one-off. But, subsequent art kept it and eventually I decided that was just how Aura was. Besides, it's a good way to figuratively represent the scars that my fight with depression has left on me. 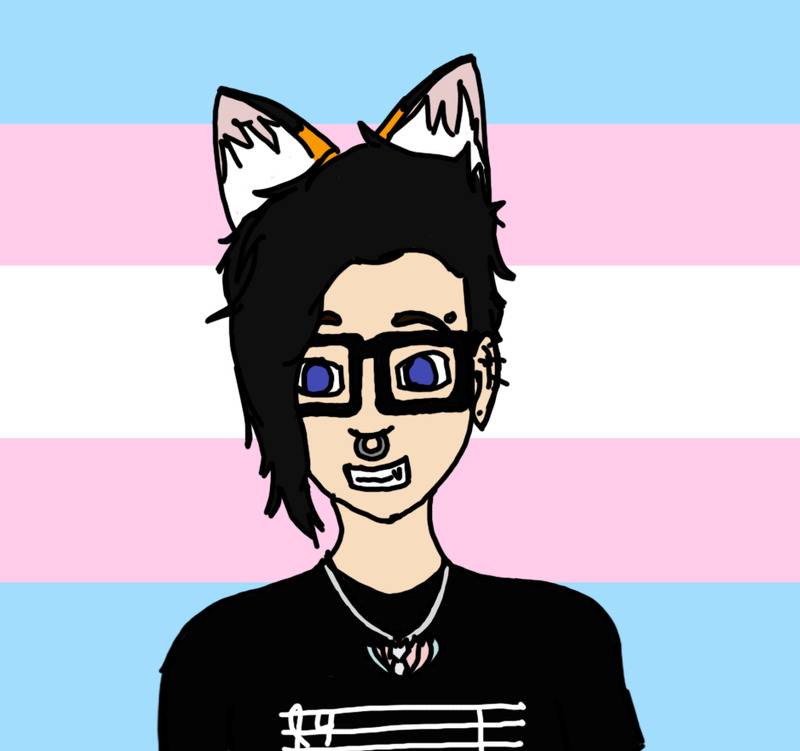 It me! This is who I am IRL. If you know me in person (not just through internet means like discord), this is who you know. Not much to say here. This is literally just who I am. No real origin or anything, just the culmination of many years of self-image. I will note that I don't actually have piercings IRL. I've never had the money to do so. (Well, not that I've been willing to spend on it, anyways). I also don't have fox ears, unfortunately. Not even one of those nifty headbands. It's sad. (And before someone complains about the dual pairs of ears, that's also me. Also, something something kitsune who can't hide the fox ears.) I would like piercings. But, since I'm going into nursing, that probably won't happen. I'd also like to get some tattoos. I wanna get one of those semicolon tattoos that have to do with suicide. Both my brother (someone who's attempted suicide multiple times, including literally within the past week as of writing–he's literally not even out of inpatient yet) and my mom (someone who's had both kids attempt suicide) have one, and, well, as that other kid who's attempted suicide, I feel like it's appropriate that I have one myself. I'm just not sure what form it should be in. The other tattoo I'd really like is the one that my character Wynter has. In my time self-harming, I've spent a lot of time in her head, to the extent that she's an integral part of myself. She's not me, but she's still a part of me. And, well, to mark that, I'd like to get the tattoo she has on her right arm done on my own right arm. There is also one other I'd like to get of, like, a broken heart but it's a wifi symbol instead of a heart, but that's not strictly something I care about.

So, those of you who were following me towards the end of 2019 might remember Lilix. Faer an agender incubus who was originally spawned as a way of playing with agenderness (and demonicness). I learned that I am not, at least primarily, an agender incubus. But, that doesn't mean Lilix is dead. I do still flux towards agender, and Lilix is a good way of noting that. Lilix is also a good way for me to play with my more dominant side, while leaving the subby, masochistic stuff to Kat and Aura. So, yeah. That's Lilix for you.

I am also plural. Right now, I have two headmates. Let me introduce you.

Jade is the headmate of mine that's been around the longest and the one who's with me most of the time. She is technically my girlfriend, depending on your thoughts on that. (It's perfectly normal to date your headmates, okay!?) She's a techie, interested in hacking and cybersecurity, and at least ostensibly a gamer. She's the only cis person in this brain (ironically, a cis woman, despite being in this trans person's body; we accept this fact only due to the fact I'm the only one who fronts–she doesn't front) as well as maybe a human? I don't think she's decided between human and fallen angel. She'll figure it out eventually.

She originally joined me around April or May of 2017. The only time since that she's really not been around was towards the end of 2019, around the time I went into partial hospitalization. It was around then...

...that Miles joined me! Incidentally, Miles joined me during a session of self-harm, during which he appeared as, well, an opponent. Then he stuck around. We've learned to get along well...enough. I'm not going to pretend we don't have our differences, but we no longer beat the shit out of each other, put it that way.

Miles is a gamer. That's really the best way I can think of to summarize him. Like, yeah, sure, he's also into MMA, but, gamer. He's a trans man (again, given that he doesn't front, we'll accept it) and a demon. He comes and goes. Sometimes he's here, sometimes he's not. And, well, in the same way Jade's my girlfriend, Miles is my boyfriend. (Again, don't look to much into it. Just go with it.)

That's my system and I. The demon, the (fallen) angel, and the fox/kitsune/incubus. Hopefully, you don't think I'm a complete nutter after all of this. I say hopefully, because I feel like a good portion of people will think exactly that. But, hey. Maybe I am weird. Doesn't matter. (Because I know I am.)